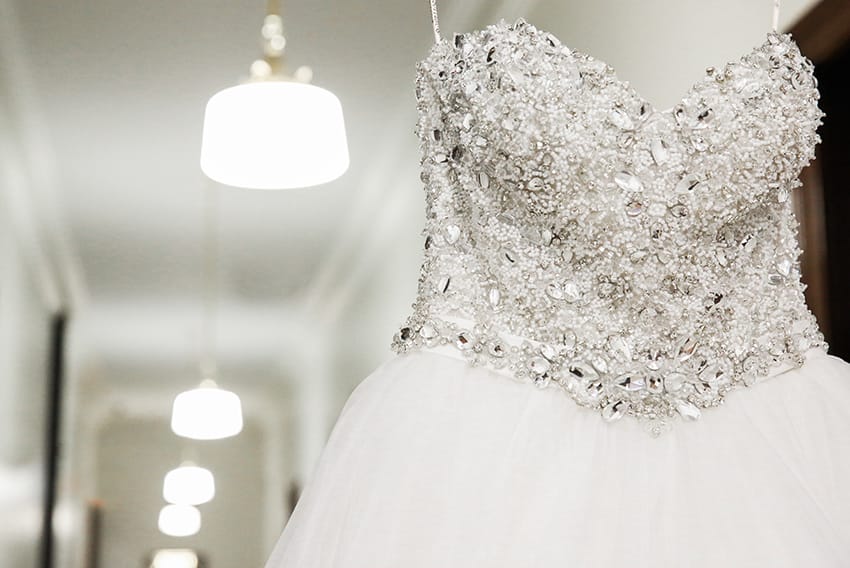 Crystals and volume are pretty much synonymous with princess ballgowns, and Esme Marie showcases both with elegance and femininity. Keep scrolling for Maggie bride Katrina’s glamorous New Year’s Eve nuptials, and head to an Authorized Retailer to find your fairytale wedding dress today!

This glamorous winter wedding was shot beautifully by Kelli Carrico Photography. Check out Troy and Katrina’s wedding video by Elevated Media in the link.

Which gown did you wear?
Esme Marie*

How did you know when you found “the dress”?
“I had tried on several different gowns at various boutiques and bridal shops and they just didn’t feel right. Due to my lack of success, a girlfriend and I were tossing out various names of designers and Maggie was on the list. I pulled up the website on my phone and immediately upon seeing the Esme gown online – I just knew. I called around to different boutiques and I found a shop an hour away that had one in stock. I drove up immediately after work to try it on before the shop closed. As soon as I saw the gown in person and tried her on, my instinct was spot on… this. is. the. one.”

How did you and your partner meet?
“Katrina knew of Troy through a mutual acquaintance they shared in undergraduate school. She found Troy very attractive, yet at the time, the two were never formally introduced. Fast forward two years later… both are in graduate school balancing life and studies, and Troy, his job in the US military. The military was notorious for sending Troy off on missions across the world and as he was on a mission in Puerto Rico, he found himself scrolling through FB in his free time. On this particularly hot day in between tasks and a water break, he ran across Katrina’s profile on his ‘Friends You May Know’ section. He found her very attractive and sent her a friend request, as he knew that he had to get to know her! Being of inquisitive mind, Katrina accepted. At the time, she was in the library taking a mental break as she had been studying for a final examination for hours. Troy messaged Katrina right away and the string of social media pragmatics ensued. Through long distance communication, the two found they had a lot in common, such as sharing a love for Atlanta, Georgia and having actually frequented several of the same social circles.
Once Troy landed back in West Virginia, he and Katrina met up the next evening with a group of friends for a burger at a local restaurant called Fat Patty’s in Teays Valley, WV. There was less pressure this way, having more than each other there for their first encounter. When Katrina first laid eyes on Troy, she realized he was just as gorgeous in person as he was in his pictures. The night began with the two sitting beside of each other, yet as more friends joined the table (whom were unaware of their interest in each other), they tended to pull up a chair and position themselves in between them. By the end of the night Katrina and Troy were merely looking at one another from opposite ends of the table. Troy shot Katrina a text and invited her and her friends out with him and his to continue the night. Katrina complied and it should be said, from that moment on, sparks flew and they have been inseparable ever since.”

How did they propose?
“Katrina and Troy share a passion for Atlanta, Georgia. Katrina grew up a Braves fan and Troy’s dad lives in the heart of the city. Troy asked Katrina to be his girlfriend in the spring of 2014 in Atlanta and it was only fitting he asked her to be his wife there as well. During a ‘routine’ visit to Atlanta, the two spent their time hiking and restaurant hopping. It was just a normal Friday when Troy’s dad suggested everyone try a highly recommended restaurant called the Canoe, located in Atlanta’s historic Vinings area on the Chattahoochee River. Katrina was happy to comply and even more excited to play dress up and dine in elegance. The restaurant was warm and welcoming with an immediate appearance of class. The gorgeous riverside seating area embellished with an outdoor bar, exquisite floral arrangements and dim lighting, was the perfect spot for Troy to propose. Unfortunately, being that it was November, Katrina found being outdoors for an extended period of time extremely frigid. The two were taking pictures along the riverbank when Katrina’s fingers and toes became so numb that she decided to go inside to see if their table was ready. As she walked away, Troy’s dad, who was playing photographer, encouraged her to participate in one more photo. As Katrina turned back, she found Troy down on one knee. Needless to say, the fact that she was cold didn’t matter anymore and all things warm and true filled her heart. What Katrina says she remembers most about that night was the big smile Troy had on his face when he asked her to be his wife.”

Where did you get married?
“Troy and Katrina celebrated their wedding day on New Year’s Eve inside of the West Virginia State Capitol building located in Charleston, WV. The West Virginia State Capitol is the seat of government for the state of West Virginia, and houses the West Virginia Legislature and the office of the Governor of West Virginia. The front of the building faces the Kanawha River, and the entire capitol plaza is bordered by several of Charleston’s busiest streets. The grounds include several statues, including Abraham Lincoln on the front plaza and Stonewall Jackson, a native of the state, near the southeast corner of the plaza; there are also two large fountains on the grounds. At a height of 292 feet, the State Capitol is the tallest building in West Virginia with its dome covered in copper with gold leaf. Foreign to weddings and permission granted, its marble interior was the idyllic location for this elegant New Year’s Eve ceremony.”

Did your wedding have a theme?
“The couple chose the long-established NYE color scheme of silver, gold, and black with everything draped in sequin and glitter. Their photographer Kelli Carrico provided them with her undivided attention capturing every. single. detail.”

“In between the ceremony and the reception the wedding party traveled down town Charleston to a local Restaurant & Wine Cellar to enjoy some bubbly.

Thanks to the technical support of a close friend, the couple and their guests were able to count down and watch the ball drop live on a projector screen that dropped five minutes before midnight.”

How did you decide what you wanted your wedding to look like?
“Many brides dream about a gorgeous summer wedding, yet I’m always about bending the rules. I knew winter was more my style with its sexy and warm appeal. Being that New Year’s Eve is one of the largest global celebrations in the world with a reputation of class, timelessness, glitz, and glamour, we wanted our wedding to capture everything that it encompasses. Sparklers and champagne are practically mandatory with kisses at midnight desired – what’s not to love about the magic that comes with New Year’s Eve?”

How did you decide what you wanted your wedding to look like?
“Many brides dream about a gorgeous summer wedding, yet I’m always about bending the rules. I knew winter was more my style with its sexy and warm appeal. Being that New Year’s Eve is one of the largest global celebrations in the world with a reputation of class, timelessness, glitz, and glamour, we wanted our wedding to capture everything that it encompasses. Sparklers and champagne are practically mandatory with kisses at midnight desired – what’s not to love about the magic that comes with New Year’s Eve?”

What was your favorite wedding day moment?
“Katrina says her most memorable moment was the look on Troy’s face when he saw her for the first time. Katrina countered that another favorite moment of hers was when the couple counted down and watched the ball drop via live stream with all of their family and friends. Troy says his favorite moment—second to seeing Katrina for their first time during their first look—was traveling to downtown Charleston and taking pictures in the streets and at a local restaurant and wine cellar.”

Describe your wedding in one word:
“Clinquant!”

What advice do you have for future brides?
“Start your planning as early as possible! I ran in to a lot of trouble booking venues due to the fact we chose a holiday to commemorate our big day. Pick a place first, then a date. Once you have your dream venue, see what days they have available and build from there. Additionally, if you have a particular photographer in mind, book them immediately. My photographer informed me she had two other brides reach out to her for my date within the same week after having confirmed.” 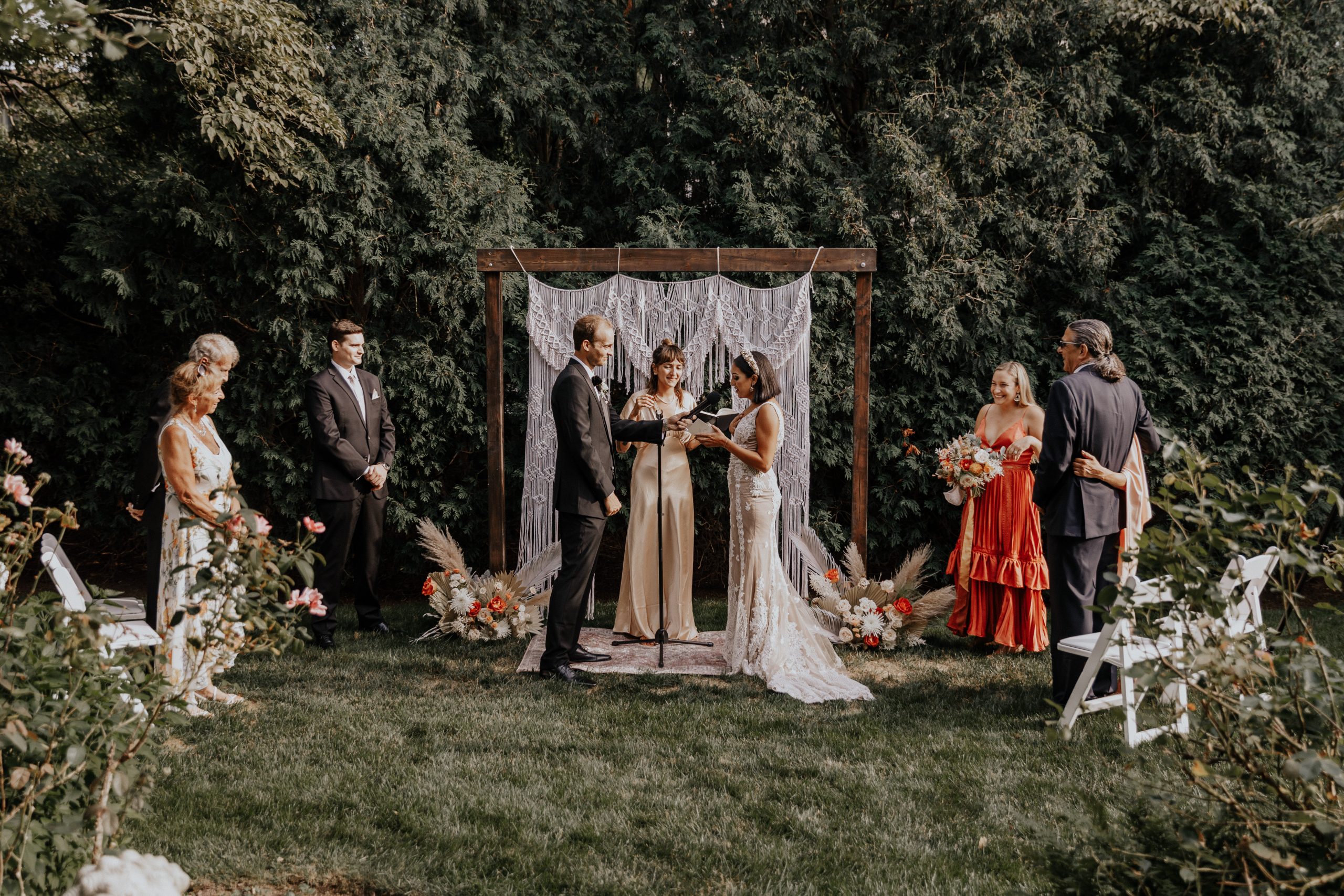 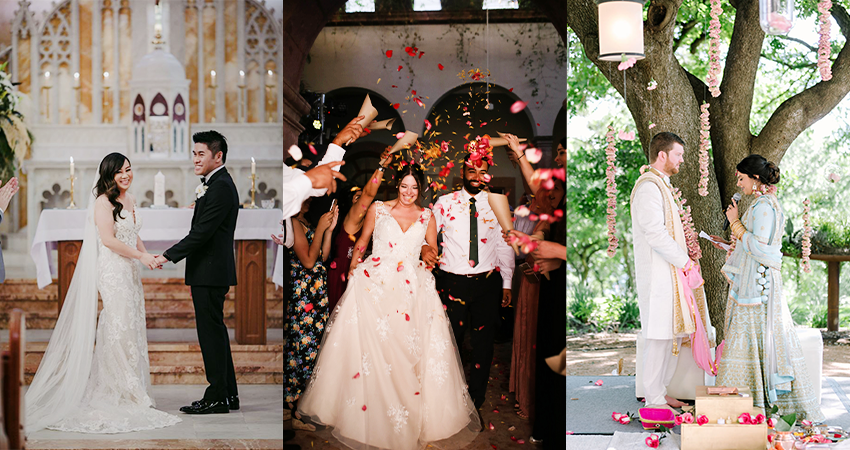 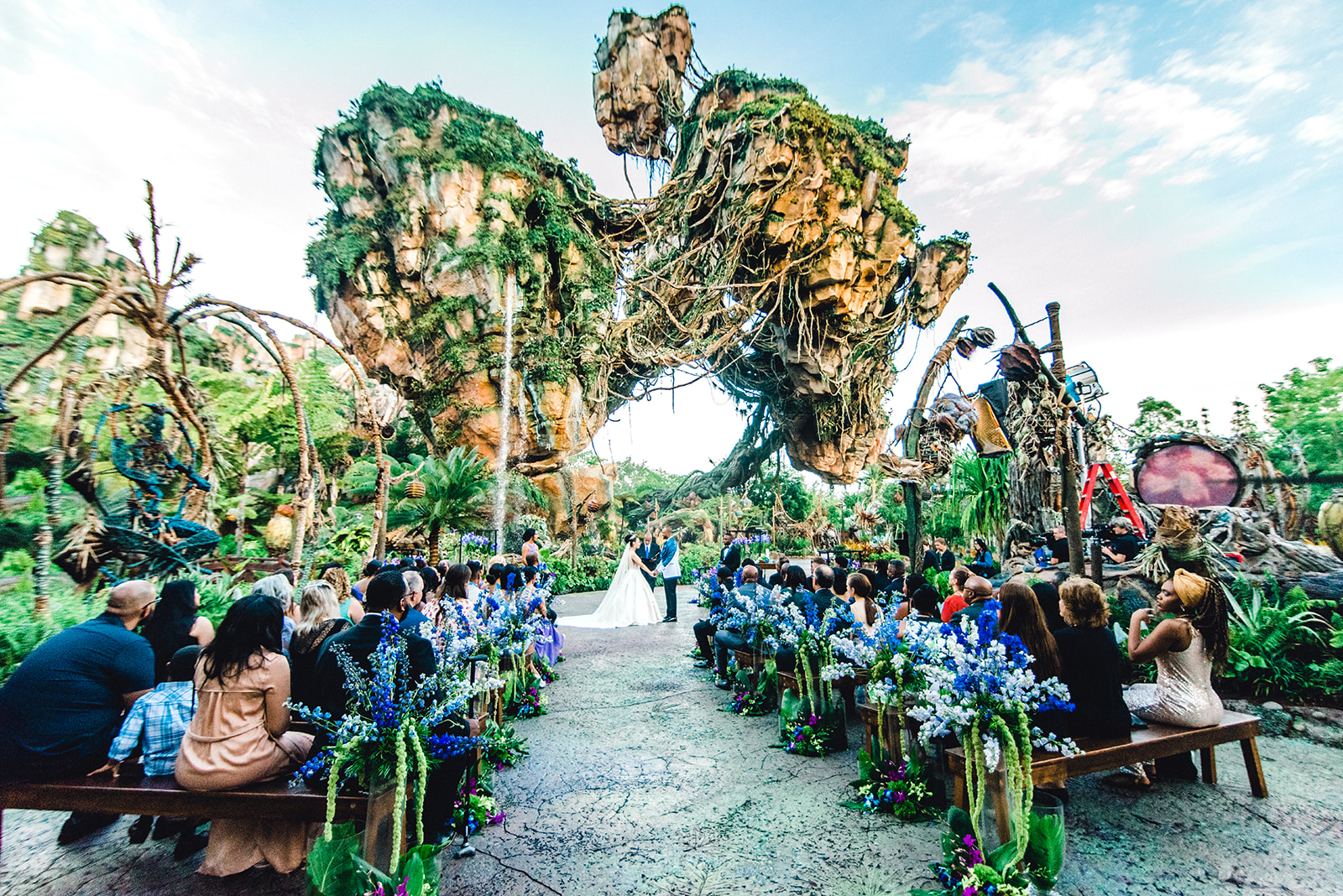 Fairytale Wedding at Disney’s Pandora the World of Avatar 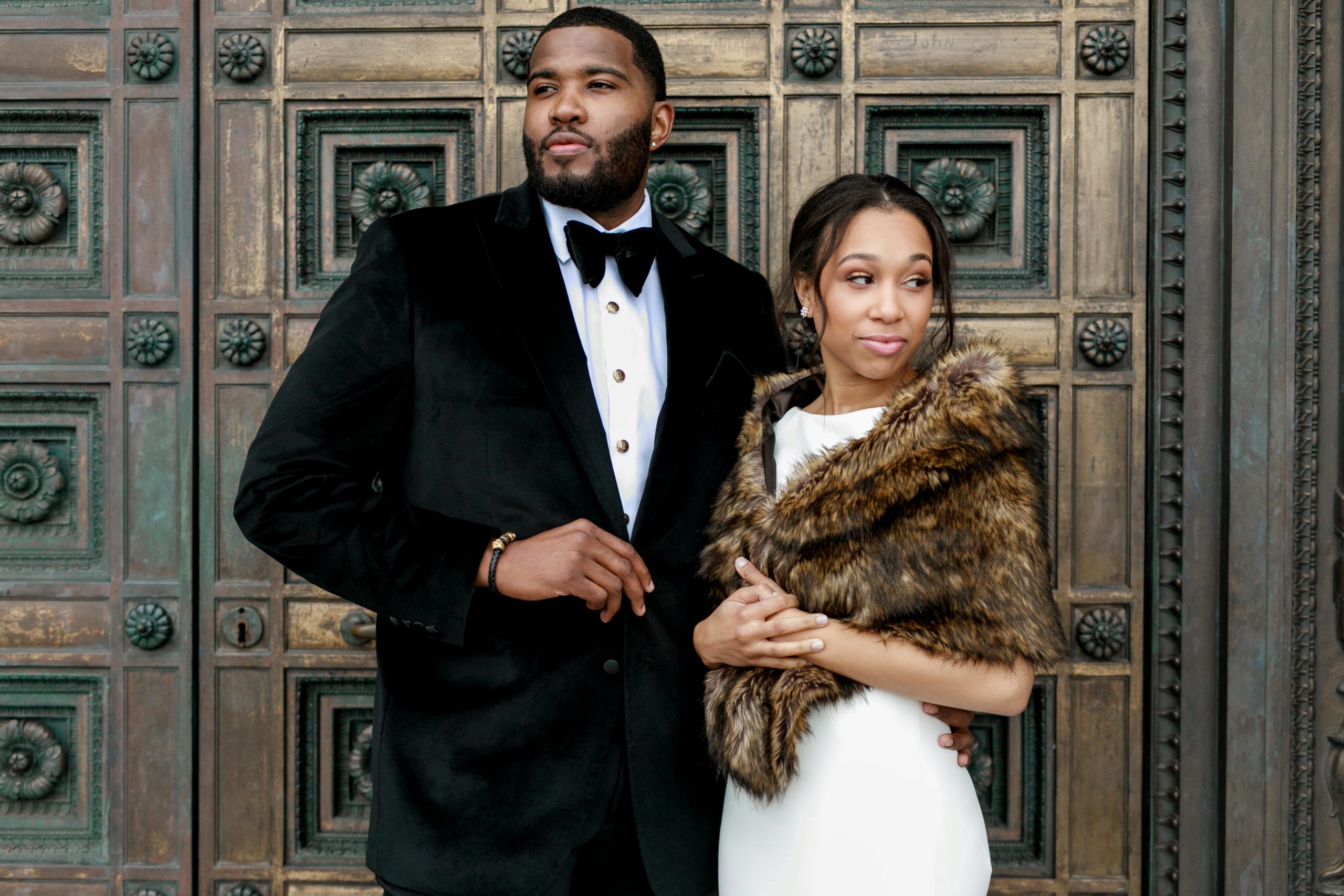 Save your favorite wedding dresses, learn tip and tricks to planning your wedding and receive early access to all things Maggie!